Statistical Yearbook “Land Governance Monitoring in Ukraine” is a reference book, which contains all key indicators describing the status of land governance in Ukraine based on administrative data accumulated by the central government authorities.

The current Yearbook is a follow up on activities for better transparency of land governance in Ukraine started within the project “Capacity Development for Evidence-Based Land and Agricultural Policy Making”, which was supported by the World Bank. The Yearbook “Land Governance Monitoring in Ukraine: 2016-2017” is the second edition of the statistical compendium, based on data for July 2015 – June 2017. The previous yearbook covered the period from January 2013 to June 2015.

The Land Governance Monitoring is a system for collecting, storing and publishing data on the status of land governance in Ukraine. The Monitoring is carried out at the level of districts (rayons) and cities of regional subordination, as well as for cities of Kyiv and Sevastopol. These indicators describe the basic characteristics of land resources and land governance, namely the completeness of the State Land Cadastre and State Registry of Property Rights for Real Estate; the number and characteristics of land transactions; land tax; land-related conflicts in court; privatization and expropriation of land; and equality of rights among different categories of land owners and land users. 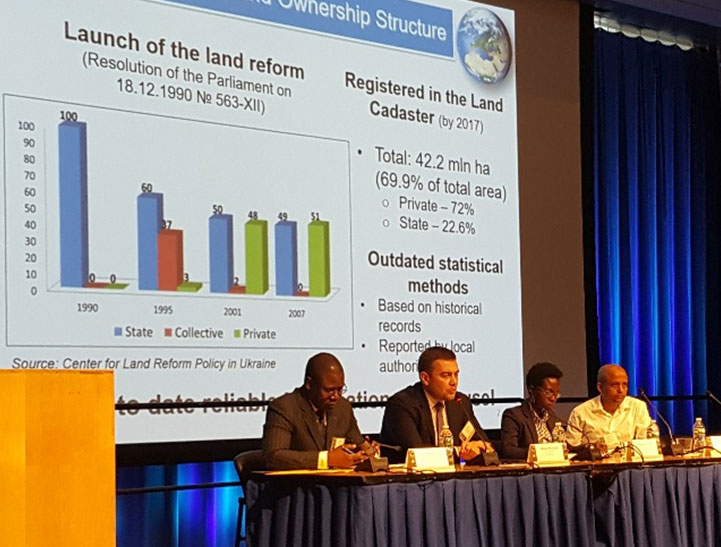 The Resolution stipulates information exchange among the government authorities, involved in the monitoring. It also contains a list of 65 indicators to be reported.

The list of indicators correspond to the best practices in developed countries and the recommendations of the World Bank (LGAF, 2013). It also describes the land reform in Ukraine. The implementation of Monitoring corresponds to the principles stated in the FAO Voluntary Guidelines on the Responsible Governance of Tenure.

Establishment of the Monitoring System is driven by the fact that by 2014, Ukraine had no open comprehensive regionally disaggregated data on land governance suitable for policy analysis and policy design or business decision making. Such lack of data provided room for political speculations on this topic and slow progress of reforms.

The Monitoring aims to:

The Monitoring is based on the following principles:

Administrative data for the Monitoring implementation were provided by six government authorities (Figure 2):

Yearbook Structure. The Yearbook consists of 2 parts. Part I – The Monitoring Results – offers reference material on major characteristics of land resources and land governance. Part II is an electronic database with respective values of the Monitoring indicators at rayon and city levels. All the data is in open access in the format suitable for further analysis and will be updated regularly.

Results of the Land Governance Monitoring for July 2015 – June 2017 allow to identify development trends in land governance and problems with data collection and data quality. It also highlights the prospects for further development of the Monitoring system. 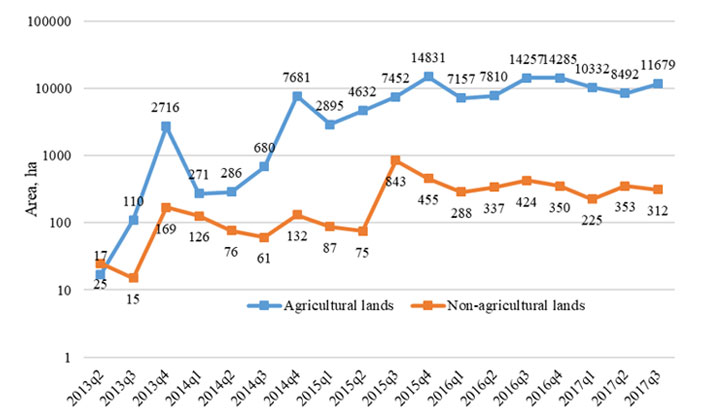 Issues identified in the process of data collection and analysis. The Monitoring implementation revealed several issues. First, is related with delays with provision of the information. Second is non-compliance with the submission standards, duplication of data. There are also cases where important data for policy decisions are not recorded and / or not provided in the form of regular reports. The automation of the Monitoring will help to overcome most of these issues in the future.

Perspective. The experience of the second wave of Land Governance Monitoring proves highlight the need for the following steps: (i) development of the regulatory and legal acts to define the Land Governance Monitoring and establish its implementation procedure; (ii) implementation of an automated reporting systems and publishing the results in open access with regular updates; and (iii) conducting information and awareness-building activities using the Monitoring data to limit the chances for manipulation with the statistics on land governance in Ukraine and to provide tools for making evidence-based decisions in this area.

If you have any questions on the Land Governance Monitoring in Ukraine, please contact: tkorzhovskaya@worldbank.org