The state has exempted agricultural producers from paying land tax and rental payment for state-owned agricultural land for two months due to the coronavirus pandemic. The Ministry of Economy declares savings of UAH 486 for agri-producers. Why is it difficult to call this step balanced and responsible?

First, a few facts and some conclusions, because when making such decisions you need to see the full picture and make decisions based on facts.

Since 1999, farmers have had two sources of tax benefits – special VAT regime and fixed agricultural tax, which is now called the single tax of Group 4 entrepreneurs (Fig. 1). In 2017, the special regime was abolished, but the single tax remained. The single tax replaces income tax and land tax and it is equal to 0.95% of the normative monetary valuation of land, which is about 270 UAH per hectare. If agricultural producers were required to use the general taxation system, they would have to pay much higher amounts of taxes. The total benefit from the single tax is more than UAH 5 billion per year, so it is not clear why additional benefits should be added.

Figure 1. State support to farmers since 1998 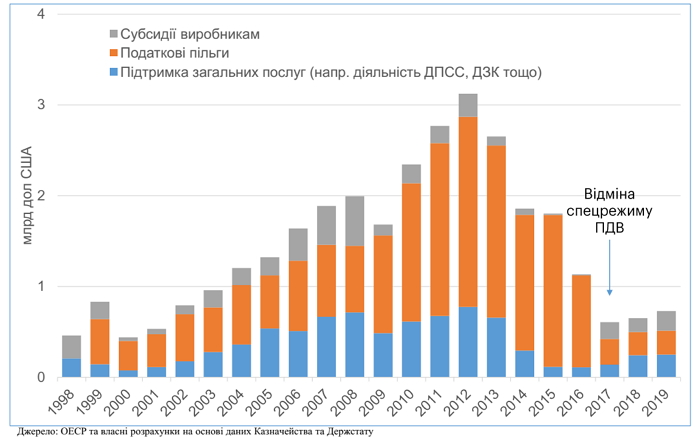 The budgets of rural communities are currently highly dependent on transfers from the State budget; the rest of income is made of their own tax and non-tax revenues. Only about 11% of the total revenues of local budgets are their own revenues from local taxes and fees, and more than 50% of which is generated by land-related sources. Rental payments for state and communal land are the most important of them (Fig. 2). So, what do we have? Firstly, it is obvious that the central government is “using others to pull chestnuts out of the fire” when disposing of resources that simply do not belong to it at all. Secondly, what sources should rural communities use now to compensate for their lost income, since noone has relieved their powers and responsibilities? 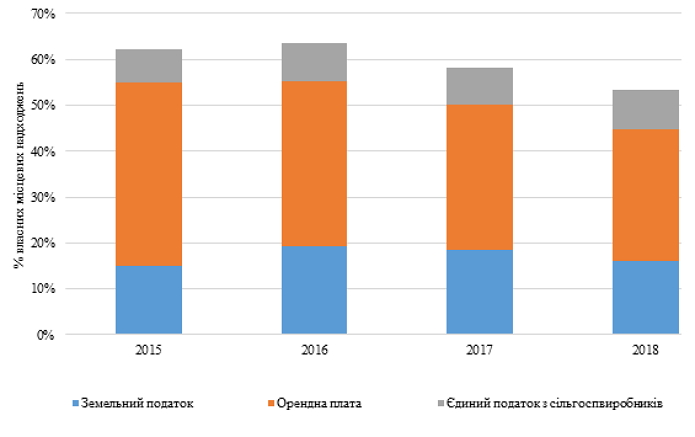 In Ukraine, a tradition has already shaped that agrarian policy is developed and implemented in one way or another for the benefits of large and medium-sized agricultural producers, while neglecting small and family farmers. One could only mention the moratorium on agricultural land turnover, which has been depriving small and family farmers of vital developmental investment for almost 20 years. As a results, it was impossible to obtain credit secured by one’s own land, since small farmers mainly work on their own land. I will also remind you of continual problems and scandals around subsidies, which eventually go into the pockets of large farmers, and so on. The same situation is about the exemption from land tax and rental payment on state-owned land. The fact is that the average size of state-owned agricultural parcels is about 80 hectares. Accordingly, such considerable land parcels can be rented mainly by medium and large farmers. Also, large and medium farmers have an advantage over small ones at land auctions, which have become mandatory since 2016, as they are more profitable on average and, therefore, more capable of competing for land.

Farmers were repared for the planting period long before the quarantine; foreign trade continues (only passenger traffic is restricted) – accordingly, sale of products continues. The devaluation of the national currency nothing but adds to the competitiveness of domestic products. And due to the presently increased demand, farmers may even obtain additional benefits. The same situation is in the livestock sector: products are made and sold. Therefore, in my opinion, farmers have no objective and important quarantine (coronavirus)-related challenges which would demand writing off land tax and rental payments.

In conclusion, exempring state-owned land from land tax and rental payment, first of all, seems to be using rural communities to pull chestnuts out of the fire. One can hardly justify it in terms of the existing tax benefits, the impact of quarantine (coronavirus) on farmers, and in terms of justice.